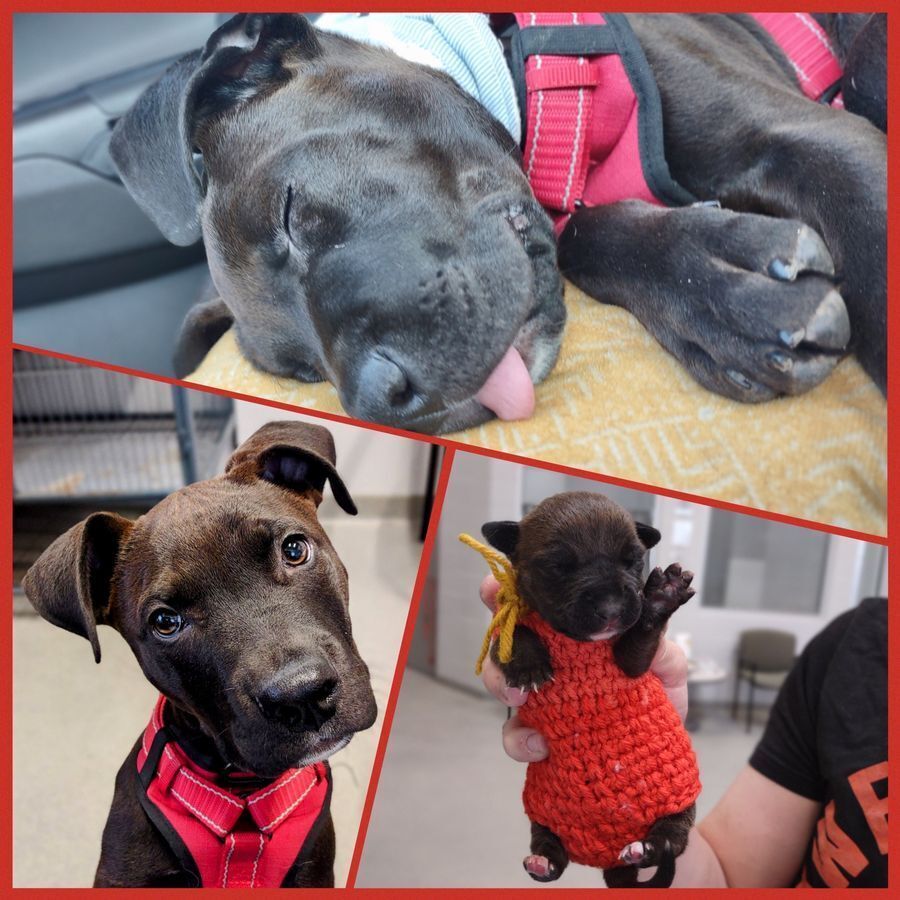 Kits story technically started at a small shelter in Texas. His mom, Jenni was found as a stray and taken to the small city pound in Dumas, Texas on Thanksgiving day. With no adopters and no owners that came to look for her, Jenni was short listed for euthanasia.

We stepped in and offered her safety at our shelter in Beatrice. She arrived on December 4th, and immediately after arrival we knew we were in for a journey, she was not only pregnant, but she was darn near ready to pop, she was engorged with milk and we knew we didn't have the luxury of time, so we went to work getting a maternity ward set up for her less than 36 hours later, our family grew again by four more precious little mouths.

When Kit was born he seemed to latch ok and settled in well with his siblings but within 24 hours we knew something wasn't right. His blood sugar was dangerously low, he was cold and lethargic, had a cough and raspy breathing and he wouldn't latch on his mom's nipple like the other 3 puppies. After further examination we found a cleft palate in his mouth. Its a relatively rare birth defect and one we have never come across at our shelter that leaves the roof of his mouth open to the nasal cavity allowing air and fluids to end up in the wrong places. His defect was severe enough to give him aspiration pneumonia by 24 hours old and make nursing from his mom or even a bottle a life-threatening ordeal.

We knew what needed to happen- we bottle feed and tube feed dozens of orphaned kittens each season. Taking Kit from his mother and siblings and handraising him with tube feeding and medications was his only chance at life. He was put on an around the clock tube feeding regimen, getting fed every 3 hours with several medications to help him overcome the aspiration pneumonia. With very careful care, and many visits to Oakview Veterinary Clinic.

He had several rounds of aspiration pneumonia even with tube feeding, and after a very nerve wracking Christmas Eve, we woke up on Christmas morning to our little miracle, still alive and ready to thrive. Slowly he gained weight, got strong, finally made it to 3 months old. At 3 months we started reaching out to Veterinary clinics with advanced surgical capabilities to repair his palate and we were fortunate to get an appointment with Iowa State University.

After multiple surgical procedures, including overnight stays, return checkups and special feeding they were finally able to surgically close the defect, but the challenges weren't over yet. He had a 21 day period where he wasn't allowed to run, jump, eat, chew or rough house, he was fed completely through a feeding tube inserted directly into his belly by passing his mouth and we couldn't risk the tube pulling out, or injuring the healing surgery site in his mouth. Now if you've ever raised a puppy you will realize how ridiculously hard it was to follow those instructions. But we were committed and afterwards, Kit was finally able to eat his first meal safely without the risk of inhaling it into his lungs!  What a relief that was.

After seeing him grow up in the shelter, we knew Kit was destined for something special. He has become a spokes-dog for BHS dogs and plans to complete his Therapy dog training and certification next year so that he can visit schools, nursing homes and businesses to help share the story of how he lived and is now thriving when he likely would have died at another shelter. What we have is special, and Kit is here to show for it.